Let Yourself Be Huge

Happy May, everyone. I thought about slinking back into view and apologizing halfheartedly for disappearing, but I apologize for NOTHING!

Also, April was kind of a stupid month., so I decided it didn't deserve to exist here.

This last week (by which I mean last monday), I climbed the incline with Rosalinde. Also known as The Hell of a Trillian Steps. Basically, I walked up a mountain in eighty degree (Fahrenheit, of course) weather, because for some mysterious reason, we thought this would be a fun way to use my day off. This, for those of you who don't know, is a three mile staircase going straight up into the Rockies. It's one of the ways crazy mountain people like to walk up a 14,000 ft mountain. 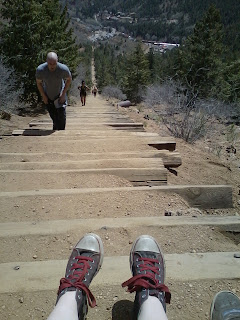 I think this is right after the false summit.

Every hundred steps or so (I wasn't counting, because that would be too depressing), we would stop and rest. We'd look down at the steps we'd just come up and the world spreading out down below us. And the thing about seeing that is that you have too be far enough above it, and because I can't just sit on a mountain side and go, "ooh look, I can see Kansas from here," it got me thinking about a lot of things, primarily how huge and how small we are.

Have you ever studied what perspective means in two-dimensional art? I was taught the basics of it in middle school, and I've learned progressively more as I have grown in my art. Basically, what it comes down to is creating the illusion of a three-dimensional space on a two-dimensional surface. Objects that are closer appear larger, and objects that are farther away appear smaller, and things that are really far away, like the horizon line, begin to get blurry. That's called atmospheric perspective.

I started applying this art definition or perspective to life, thinking back over the past, and how events that are close to you can seem earth-shattering, and those that you've moved long past have receded and blurred, becoming less important. Mountains and mole-hills. If things are really big enough, you can see them from miles away, and they'll affect your mental landscape from almost any distance.

I think it can be dangerous to equate proximity and importance. But that's not actually what I meant to talk about in this post, as you may have gathered, its title still being utterly unrelated.

A little more than halfway up, we stopped for a real rest. Not sitting down for two minutes and drinking some water, but a real rest. We found this shady spot off the staircase and laid on the ground for maybe half an hour, watching the sky and talking.

A lot of what we do revolves around talking, even climbing a mountain.

The clouds were practically right on top of us, and we could see the color spectrum flowing over them as they passed near the sun. Thousands of gallons of water floating above us, and reflecting the light spectrum. I spent most of that day in a state of awe and gratitude for the world we live in.

While we were there, this big rock caught my eye. It was a few feet to my right, and I could see lichen growing and ants crawling over it, and it struck me:

Those ants have no idea they're living on a mountain. But how different are we, really? Living in our little piece of here and now, and never suspecting the sheer hugeness of the world. http://xkcd.com/1110/

I think people are afraid of their potential. I'm not really sure why, but for some reason, almost no one seems to genuinely want to attain excellence and hugeness. We become content with being small and insignificant in basically every way, and never reach for anything greater.

This probably sounds contradictory to all my talk of small importances; things don't have to be apocalyptic to matter. That's still true, but I think sometimes it becomes an excuse. Defending one's smallness and weakness and complacency by saying that there are lots of ways to matter. I know that sometimes happens for me when I consider not trying to do the things that I desperately want to do with my life. "Well, there are lots of ways to be happy. Maybe that's not the one I need to be pursuing."

And then I have days like that, where I slap that thought in the face, because it's utter crap.

Let yourself be huge, damn it. The world is huge and awesome and crazy, and it's just waiting to be discovered still. It will always be worth discovering, even with every scrap of the universe measured and documented and claimed. There is always more to do and see and say and learn and be. So why not? I want to do everything and go everywhere and learn as much as there is to learn. Why would I settle for this indefinitely?

I think that's probably the best way to stave off lack of motivation and frustration. If you want more, it's your responsibility to get it.

I know, probably a little heavy for me, but this is what's been in my head of late.
Posted by Rachel, the author and arbiter at 1:54 PM

Rachel, the author and arbiter
I am, so they tell me, wildly opinionated, tactful like a metal baseball bat, absurd, frequently sleep-deprived, and inconveniently creative. You, imaginary readers, can thank Joe and Brandy for the existence of this blog, because apparently my other rant outlets aren't sufficient. Expect nothing consistent, either with posting speed or content.

Check out my art